It’s Not Just About Doors: Two-Door vs Four-Door Broncos 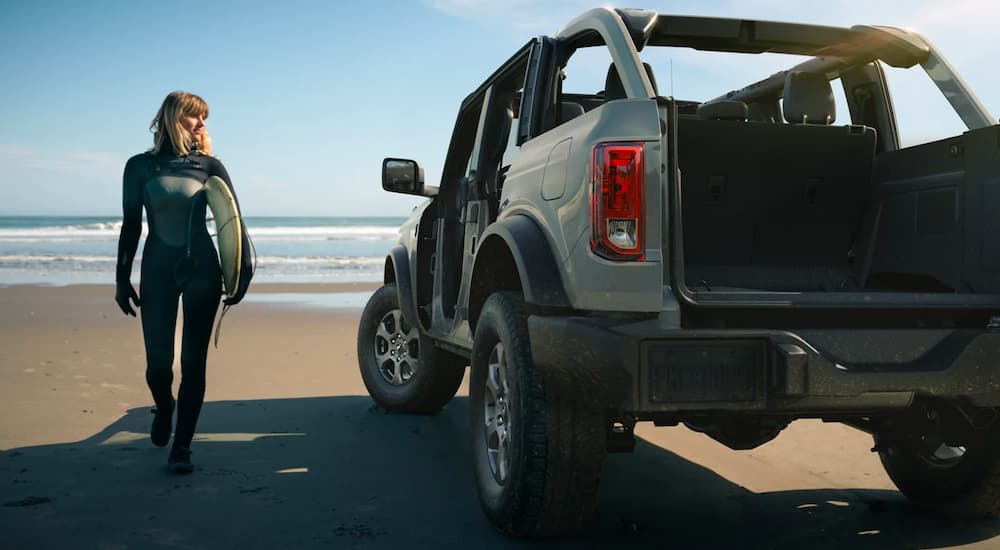 When it comes to the two-door vs four-door debate, it might seem like an easy decision. More doors are better, right? That’s not necessarily the case, however, and there are plenty of factors to consider when buying a vehicle with both options, like a used Ford Bronco. Two-door vehicles are a dying breed, and many drivers have not been shown what the differences are and why they matter. Too often, that results in a driver getting stuck with a vehicle they thought they wanted, but that doesn’t give them the experience they were hoping for. How do you know which one is right for you? What are the key differences, and how do they affect your decision? Let’s take a look at some of the biggest differences between the two-door and four-door Bronco models.

More Doors Is Not Always Better

Just because you can get more doors doesn’t mean you should, although there are undeniable advantages to a four-door vehicle. If you need space to put extra luggage, a few people, or pets, it will be easier to have a four-door Bronco. No one likes climbing over the front row to get into the back seats or awkwardly contorting themself to find gear stashed in the back row. Further, the four-door Bronco is simply larger. While the two-door Bronco only seats up to four people and offers 52.3 cu.ft. of cargo space, the four-door Bronco seats five and has 77.6 cu.ft. for your belongings.

However, this doesn’t mean that four-door vehicles are automatically better for everyone. They’re simply different, with pros and cons for each. When you look at used Broncos at our dealership, make sure to compare the two-door and four-door versions side by side––you’ll quickly see that there are some other differences, and they aren’t all in favor of the four-door models. It just depends on you and your needs and wants. Are you looking to explore nature with a group, prefer solitude, or just want to spend time with one other person?

Having more doors isn’t always necessary, and the extra doors do affect other areas of the vehicle. Don’t let someone talk you into getting something you don’t want. You know what you’ll be using your Bronco for, and you’re the one that will be driving it for at least a few years. When you’re thinking about a vehicle like the Bronco that comes with both two-door and four-door options, don’t simply choose the one with the most doors. Choose which one will work best for you. 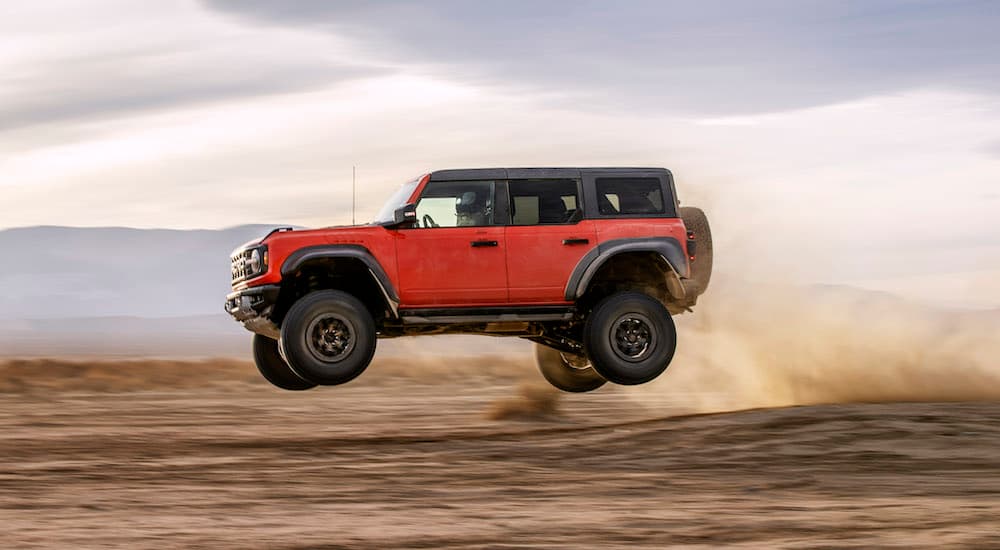 The two-door or four-door options for most vehicles tend to have pretty equal performance on the road, and the Bronco is no exception. If you’re looking for a huge difference between the two, you’re not likely to find one. Unless you are shopping for a used Bronco Raptor, which is only available with four doors, both options offer the same basic trims and configurations. However, there are subtle differences in the performance of the two-door and four-door models that are worth keeping in mind.

Perhaps the biggest difference when it comes to two-door and four-door models is the wheelbase. Simply put, the wheelbase is the distance between the front and rear axles. Why would this make such a difference? If you’ve got a two-door vehicle, you’ll usually have a smaller wheelbase since you don’t need as much room for doors. What this means is that the vehicle is smaller overall with a tighter turning radius, making it easier to maneuver when parking or driving narrow roads. In the case of the Ford Bronco, the two-door model has a wheelbase of 100.4 inches, while the four-door model’s wheelbase measures 116.1 inches. With over a foot of difference between the two, it’s easy to see how this would affect the handling.

A longer-wheelbase vehicle can be a bit more stable, particularly at higher speeds, which is why the Bronco Raptor is a four-door model. However, if you’re caught in traffic or need to turn slowly, it will be more difficult with the four-door than the two-door. The bigger vehicle is more difficult to maneuver and needs a larger area to turn around, which means it might prevent you from entering some areas because of how narrow they are. Narrow city streets, a gravel path leading up a mountainside, or a tight tunnel will all be more stressful to navigate in a four-door Bronco because of how big your vehicle is versus smaller spaces. Off-roading, in particular, can be a very different experience depending on which model you end up driving.

To Off-Road or Not to Off-Road, That Is the Question

The Bronco appeals to people who want to spend time in nature. They want a vehicle that they can drive to the middle of nowhere that won’t drag them down or prevent them from exploring. What happens when one version is better than the other, at least in some things? It can be very difficult to get into all the differences, but it’s worth the peace of mind and confidence you will gain when you try them both out and figure out whether the two-door or four-door version pairs better with your lifestyle.

If you’re going off-road, you might decide you want a four-door Bronco for its more stable ride. However, its ground clearance and breakover angle aren’t quite as suitable for traveling over rocky outcroppings, fallen trees, or through a creek. The two-door Bronco, however, is excellent for such predicaments since it sits a bit higher up than the four-door and has more space underneath for obstacles. Combined with its more agile handling, this makes the two-door the Bronco of choice for many serious adventurers.

Both the two-door and four-door models pack a big punch, they are both rugged enough to withstand many a weekend adventure, and they are both versatile enough to handle a range of responsibilities. Nearly equal performance ratings might make it more difficult for you to choose which model will be better for you in the long run, but it’s good to know that you aren’t hurting yourself by buying one over the other. The choice between two doors and four doors can ultimately be a simple matter of preference as much as anything else. 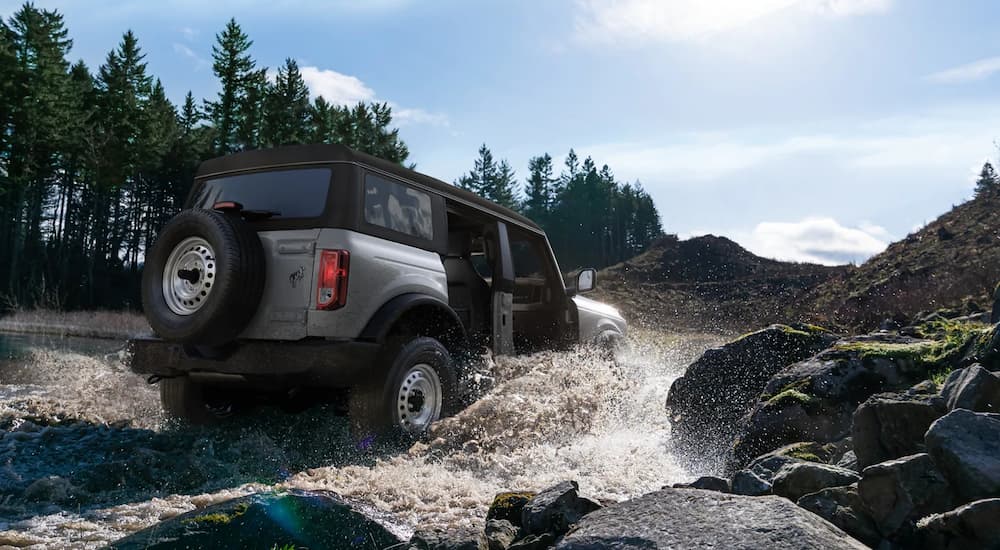 Which One Will You Choose?

At the end of the day, the decision between a two-door or four-door Bronco is up to you. Now that you know there are more differences than just the number of doors, you’re better equipped to make a good decision. There are a myriad of reasons why you may go with one or the other, and that’s okay. Plus, there are many other factors to consider. One used Bronco might offer a different paint color or special edition, while another might have add-on features you’ve been wanting to try.

Shopping for used cars opens up more possibilities, but sometimes you can’t find a used Bronco with every single detail you desire, and you have to make choices. In that case, you don’t have to worry about the number of doors overly much; just make sure to keep in mind that there are differences between two-door and four-door Broncos. The two Bronco versions aren’t a contest over which one is better, and it’s up to you to decide which one you’ll choose.