Riding the Raptor: The Evolution of a Monster 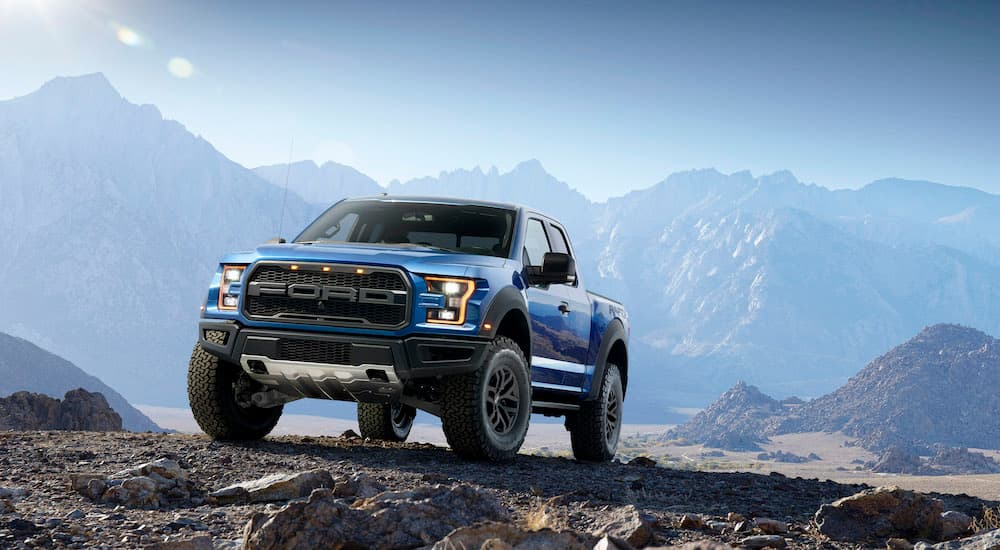 Off-roading is fun. It’s hard to find a car enthusiast who isn’t just a little bit drawn to off-road vehicles like the Bronco and the Wrangler. But as exciting as these classic off-roading vehicles are, they don’t tell the whole off-roading story. There’s another whole level of off-roading, a level that combines strength and capability with agility and maneuverability. This level is, of course, off-road trucks.

Now, car and truck enthusiasts out there probably knew that this was exactly where we were going. But if you spend most of your time on paved streets, off-road trucks may seem like a weird concept. Trucks don’t seem to be the ideal off-roading vehicle, with their girth, large dimensions, and focus on strength. Traditionally speaking, off-roaders should be flexible, not built like a rock. But, if you can find that flexibility with the strength of a rock, that’s when you’ve got a really exciting off-roader. Just take a look at a used Raptor for sale, and you’ll know what we mean.

The Raptor is a very special edition of the Ford F-150 that increases its strength for dusty trails. In other words, it takes everything that makes the F-150 an excellent pickup truck in the first place but reorients it to tackle obstacles and challenge exciting terrain, all while still performing its trucking duties at the highest possible level. The Raptor truly is one of the most exciting vehicles you’ll find because it combines two of the most exciting vehicles––off-roaders and trucks––into one brilliant model.

The Raptor first debuted almost 15 years ago. Relatively speaking, it’s a young truck. But a lot can happen in 15 years. We may be Future Ford of Sacramento, but today we’re going to look at past Fords; we’re going to take a look back at the F-150 Raptor and the changes this model has undergone. It’s a great truck to buy used because its past is so rich and exciting; you don’t necessarily need to look to the future to get behind the wheel of a great Raptor. Let’s see what’s in the Raptor’s past that may be of use to you.

It’s time to go back to the very beginning. The very first F-150 SVT Raptor debuted at SEMA in 2008, set to be released for the 2010 model year. Drivers could tell the Raptor was a different kind of F-150 merely by the exterior design; gone was the traditional Ford logo, and here was the bold-lettered “FORD” built into the grille itself.

If drivers were excited about these exterior changes, you better believe they were excited by the 411 hp produced by its large 6.2-liter V8 engine. While V8 engines are a common feature in leading high-level pickups, that level of power was groundbreaking at the time of the first Raptor’s release. This is still a capable engine today, but think about how much more exciting it was 15 years ago!

Of course, turning a truck into an off-roader cannot be accomplished with power alone. Suspension is one of the biggest factors which makes an off-roader an off-roader; you can’t clear obstacles without exceptional ground clearance, articulation, and stability. The Raptor certainly has the necessary suspension, having proven itself in the desert.

Right away, the Raptor competed in the 2008 Baja 1000. For those of you who are not familiar, the Baja 1000 is an incredibly difficult race across the Mexican desert, a race which many vehicles are not strong enough to even complete without damage or malfunctions. In its first year, the Raptor entered as an untested truck and astonished audiences with its third-place finish. That’s when people knew there was something special going on.

A truck doesn’t just enter one of the most difficult and intense off-roading races completely untested and come out the other side without some serious gravitas behind it. That gravitas is still there, and it’s not reserved for racers only. It’s open to you. The Raptor used this initial victory to propel itself into years of popularity and success. But, it wasn’t done developing. In 2017, Ford decided to shake things up. 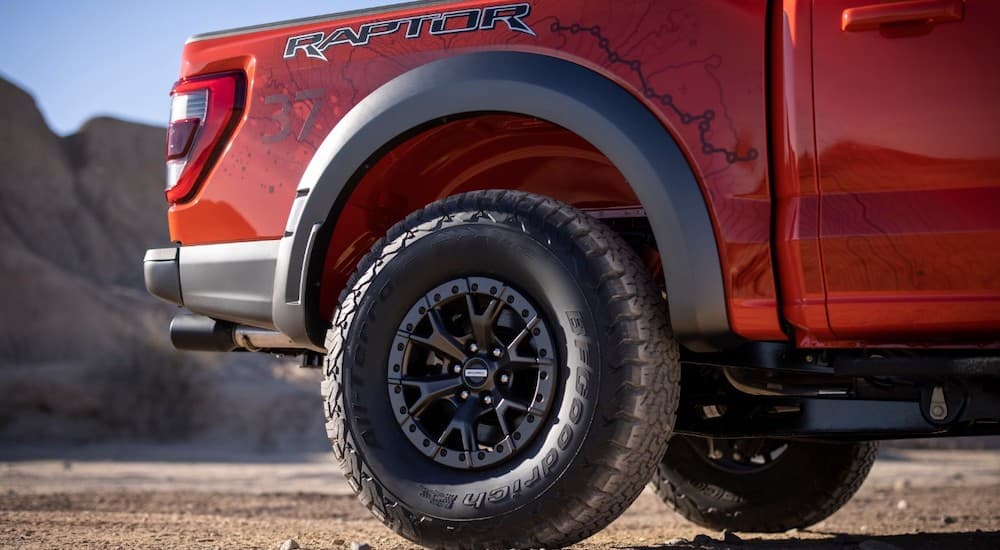 The Raptor Comes of Age

The 2017 F-150 Raptor wanted to do better. But it wanted to do better more efficiently. When the 2017 Raptor was unveiled at the 2015 Detroit International Auto Show, not everyone knew how to feel about a 3.5-liter V6 engine replacing the previously-acclaimed 6.2-liter V8 engine. After all, shouldn’t a truck of this magnitude have an engine to match?

The argument makes sense. But, consider the fact that the smaller V6 provided 450 hp while the larger V8 only offered 411 hp. Which is more important: size or performance? While there was initially some dispute over the decrease in engine size, the tides have changed quite a bit. Some still stand by the larger engine, but the desire for smaller, more efficient engines that simultaneously perform at higher specs has increased. You can’t go wrong with this combo, and since the 2017 Raptor sits atop three-inch FOX Racing Shox shock absorbers with a full 13 inches of wheel travel, you’ll be able to enjoy the strength of those performance specs on exciting terrain without taking the hit.

The 2017 Raptor also made a move forward with interior comfort. Everybody loves a good off-roading adventure, but you probably won’t be off-roading every day, so you might as well have a comfortable truck for your off days. Ford enhanced the cabin with a modern infotainment system compatible with Apple CarPlay and Android Auto and even added a Sony premium sound system. Carbon fiber trim and bolstered sports seats remind you that you’re in a high-end performance vehicle.

Perhaps the bigger step forward in terms of design was the 2017 Raptor’s high-strength steel frame. This is something that is necessary for an off-roading vehicle because it contributes to your personal safety as well as the durability of your vehicle. You’re going to get rough while off-roading–there’s essentially no way to avoid it––but if you have the right frame, your vehicle can take the hit. Now, don’t confuse “high strength” with “heavy weight.” Even with this high-strength steel, the 2017 Raptor is 500 lbs lighter than the first generation. Between the high-strength steel and the V6 engine, the name of the game with the 2017 Raptor is efficiency and excellence. 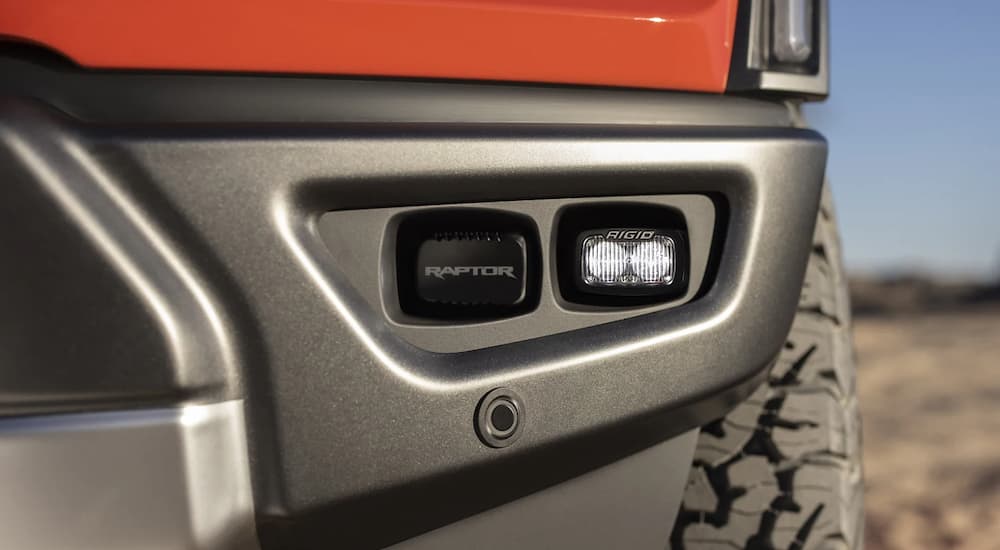 The Raptor is now in its third generation, which was ushered in with the 2022 model year. But you don’t need to buy the most current Raptor to reap the benefits of its performance, capability, and off-roading excellence. The original Raptor continues to provide excellent and exciting adventures to those who seek them, and the second-generation Raptor continues to tear up the trails with a highly-efficient engine providing 450 ponies. The Raptor has gone through changes and continues to go through changes because it is never done evolving––it is never done finding new ways to provide an even more exciting ride for drivers with an adventurous bent. If you’re ready to have a little more fun in your drive, then we’ve got an F-150 Raptor waiting just for you. If you’re not sure yet, come on in for a test drive; it shouldn’t take much convincing after that.