8 Coolest Evolutions Of The Ford Mustang 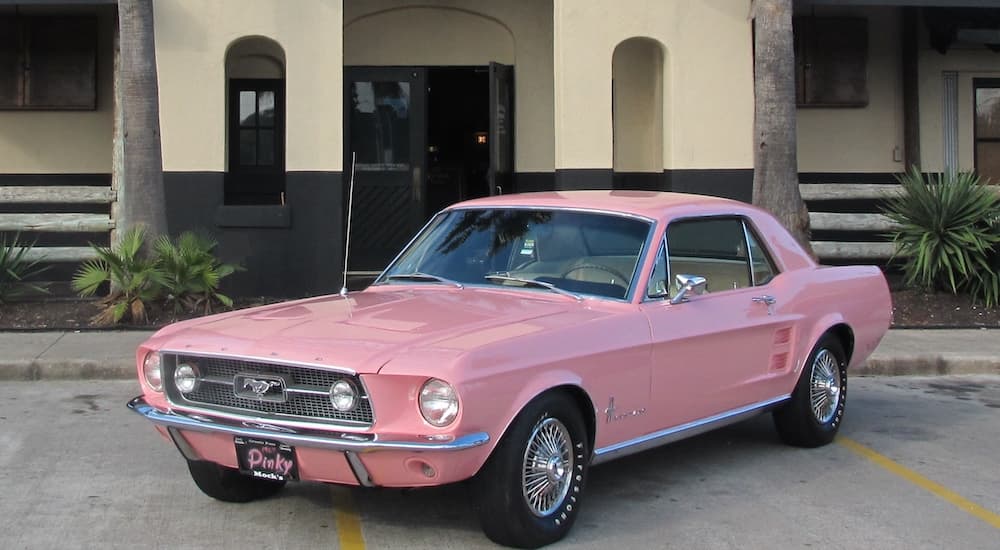 Over the years, the Ford Mustang has become a staple of American automotive iconography. Ford’s pony car managed to take the movies by storm, become a touring car, and establish itself as one of the most popular sports cars around. Most recently, the Mustang has even managed to make waves as an electric vehicle. The evolution of the Mustang has been an impressive and unique joyride that has spanned multiple generations and a wide variety of unique model year offerings. As the blue oval brand continues to make headway in exploring new routes and avenues to evolve the Mustang, constantly giving car shoppers ample reasons to visit a Roseville Ford dealer to see what’s new with the nameplate, it only seems fitting to travel back in time and revisit some of the coolest evolutionary overhauls and outings that Ford has accomplished with the Mustang.

Just a few years after the original introduction of the Mustang nameplate, Ford’s new marque was already being primed, sculpted, and hewn into an evolved version of itself. In 1967 a redesign of the Mustang was already underway, but it was the Shelby GT500 iteration that took that evolution to the next level. On top of more power thanks to a beefier engine, the 1967 Ford Mustang Shelby GT500 was given a visual makeover to match the under-the-hood performance.

You’re probably most familiar with this evolution via its appearance in the remake of the 1974 heist flick Gone In 60 Seconds. In the Nicholas Cage and Angelina Jolie film Eleanor from 2000, a 1967 Ford Mustang Shelby GT500 steals the spotlight in a dynamic end chase sequence. The car is lovingly referred to as “Eleanor,” sporting many of the lines from the original model year but with a buffed-up exterior for aerodynamic purposes and a more aggressive paint job and styling. This particular evolution is still a highly desirable muscle car even today, but replicas of Eleanor will cost you up to several hundred thousand dollars.

Arguably the most famous Ford Mustang of all time due to one of the most iconic chase scenes of all time by one of the coolest actors of all time. That’s right, the 1968 Ford Mustang GT 390 Fastback may have still been within the first generation of Mustangs, but the inclusion of a 390 cubic-inch V8, the fastback rear, and the more muscle-car oriented stylings really helped separate it from the previous models.

The Mustang definitely came across with a more defined exterior, enveloped in a muscular aesthetic to match its improved power. This was aptly put on display by King of Cool, Steve McQueen, in the 1968 crime-thriller, Bullitt, where the GT 390 was depicted in a chase scene for the ages. The popularity of this particular GT 390 Fastback would echo throughout the ages, so much so that Ford would later make a special Mustang Bullitt edition based on the properties of the vehicle featured in McQueen’s film.

Arguably one of the most menacing looking and masculine iterations of the Mustang throughout the history of the nameplate. The 1970 Boss 429 Mustang absolutely lives up to its title. Named after the 7.0-liter 429 cubic-inch V8 stuffed into the front of the car, the Boss 429 embraces its moniker thanks to the fact that its performance is based on a NASCAR powertrain. That’s right, the 429 V8 was designed for racing but needed to be homologated for stock car use, so between 1969 and 1970, Ford produced a limited quantity of 429 V8 engines for the Mustang.

Interestingly enough, even though the design of the Boss was absolutely menacing, featuring rounded rear fenders, black shutters stepped down the sports roof, and a predatory front hood scoop with race-ready wheels, it wasn’t quite a movie star like its past model year siblings. Even so, the design of the Boss 429 is impeccable, and it still looks as gnarly and powerful today as it did back in 1970. 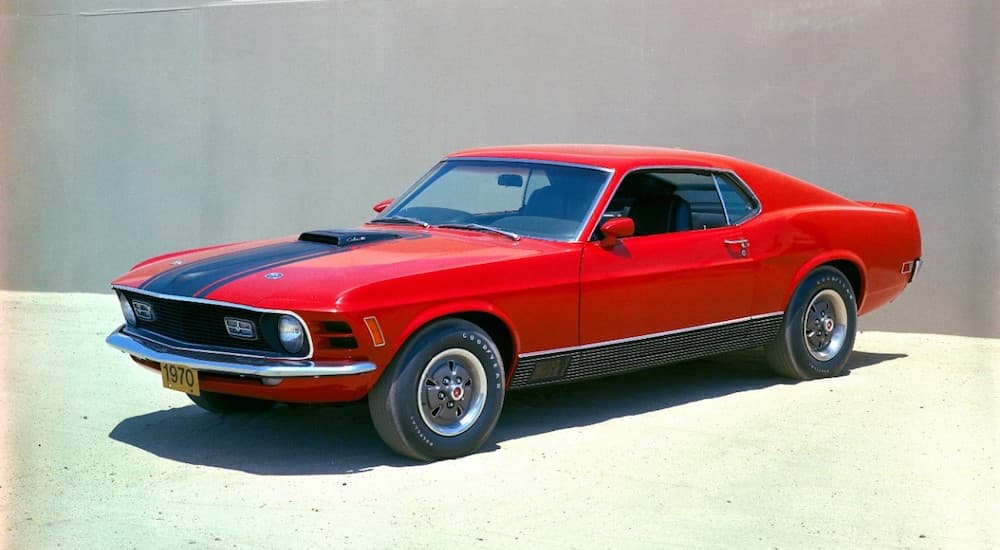 Where the Boss embodied the look of an apex muscle car at the top of the food chain, the 1973 Ford Mustang Mach 1 was more of a relaxed, lean sports car. Ford decided to go back to the Mustang being more of a pony than an over-the-top, aggressive, ferocious-looking muscle car. However, the styling of the 1973 Mach 1 almost seemed to borrow some inspiration from its European contemporaries. Gone were the wide-body rear flares and intimidating hood scoops.

The 1973 Mach 1 opted to look every bit the part of a sleek, stealthy sports machine with just enough aggression to let you know that it was still a Mustang. The sports roof from previous model years returned, but with all the right kinds of curvature and subtlety that were introduced throughout the designs of the 1970s. In many ways, the 1973 Mach 1 had the appearance and design of a very refined but still aggressively stylish sports car. This was a unique evolution of the Mustang before it went in a vastly different direction the following year when it entered into a new generation.

After years of languishing in what seemed like design purgatory – with the Mustang having an identity crisis for many years – Ford pulled the trigger on the 2005 fifth-generation refresh in a big way. Ford’s “retro-futurism” approach for the 2005 model year worked like a charm. The Mustang had a lot of modern-day updates in terms of its size, power, and drivability, but the callback to the Fastback days was also quite apparent with the design. The front end and side-profile were especially reminiscent of the classic Mustang of old.

However, there were a lot of modern sensibilities about the 2005 evolution, particularly the wider stance, shorter length, and more casual look. It was certainly a lot more evolved than most of the Mustangs throughout the 1980s and 1990s. Ford even had a special fastback edition of the 2008 Mustang Bullitt, properly brought up to date to match the changes ushered in with the fifth generation. It certainly helped further the appeal of the new overhaul. 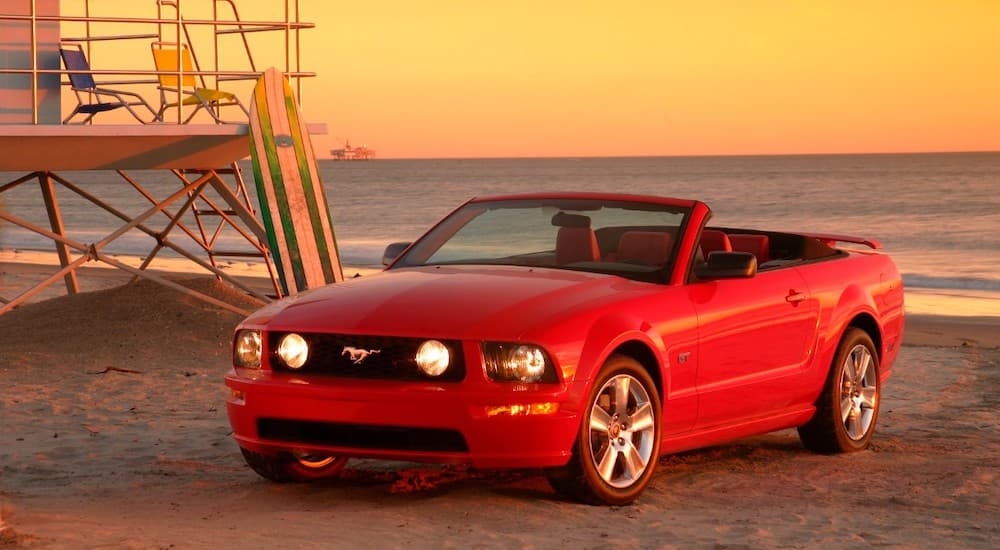 In 2013 DreamWorks Studios and Ford worked together to reveal a very special edition of the Ford Mustang, dubbed the Ford Mustang GT500 Need Speed Edition. It was a 2013 model year that was designed to appear in the 2014 movie, The Need For Speed, which was based on the popular video game series by Electronic Arts. In a way, this was actually a two-fold evolution. First off, while the prop car that appeared in the 2014 film was specially designed for movie purposes with a cool two-tone dual-stripe paint job, an awesome aerodynamic exterior with aggressive scoops, a custom grille, and a powerful 5.8-liter V8 engine, it was indeed a real car. In fact, it would even appear as a pace car in the Ford EcoBoost 400 race at the Homestead-Miami Speedway.

Furthermore, the movie was an anchor for the reveal of the 2015 model year Ford Mustang, which would become a proper production pony. It carried a few similar traits to the Mustang Need For Speed Edition but was ultimately its own beast. There was even a rather complex series of events constructed by Ford engineers and the production team to sneak the prototype 2015 model onto the set of the film while keeping media, pesky pedestrians, and even law enforcement from seeing the prototype before it would appear on the big screen for the blockbuster film.

The gap between big new iterations and alterations to the Mustang shortened during the fifth and sixth generations. Ford comfortably opted to roll out some unique new features every so often, which helped keep the Mustang frequently on the lips of car enthusiasts the world around. One way to get people talking again after a slight hiatus from anything groundbreaking was the reintroduction of the Shelby GT500. This time the popular nameplate would be revived for the 2020 Ford Mustang model year in an all-new design.

The highlight of the 2020 Ford Mustang Shelby GT500 was that it was built to compete with the biggest and best muscle cars on the market, making it one of the most powerful production cars in the industry. A supercharged V8 with 760 horsepower and 625 pound-feet of torque made it a fearsome piece of mechanical muscle to contend with. An all-new angular fascia with Cobra badging and relaxed aerodynamic lines all made for a great way to bring the classic GT500 menace from the yesteryears into the modern era.

While sports car and performance enthusiasts may have been fascinated by the debut of the 2021 Ford Mustang Mach 1, which is a combination of the Bullitt, Shelby GT350, and Shelby GT500, all wrapped up into one package, the real buzz centered around the release of the 2021 Ford Mustang Mach-E. This isn’t another pony car performance package or a dabble into supercar territory. It’s actually an all-electric crossover SUV. When you talk about evolution, this probably wasn’t what a lot of people expected to see from the popular pony car. Yet, Ford has shown that repackaging the Mustang as a 480 horsepower all-electric SUV is not outside their wheelhouse.

With the Mach-E offering interior space, on-road performance, and a high-tech approach to the look and design, no one can say that Ford is averse to creative engineering. Add on to the fact that the Mach-E sports a 300-mile range and a snazzy look, and it’s proof that Ford can pull out all the stops whenever they want. With each new evolution of the Mustang, the blue oval manages to keep car shoppers constantly circling their local Roseville Ford dealers in hopes of getting their hands on a piece of the pony car’s iconic legacy.