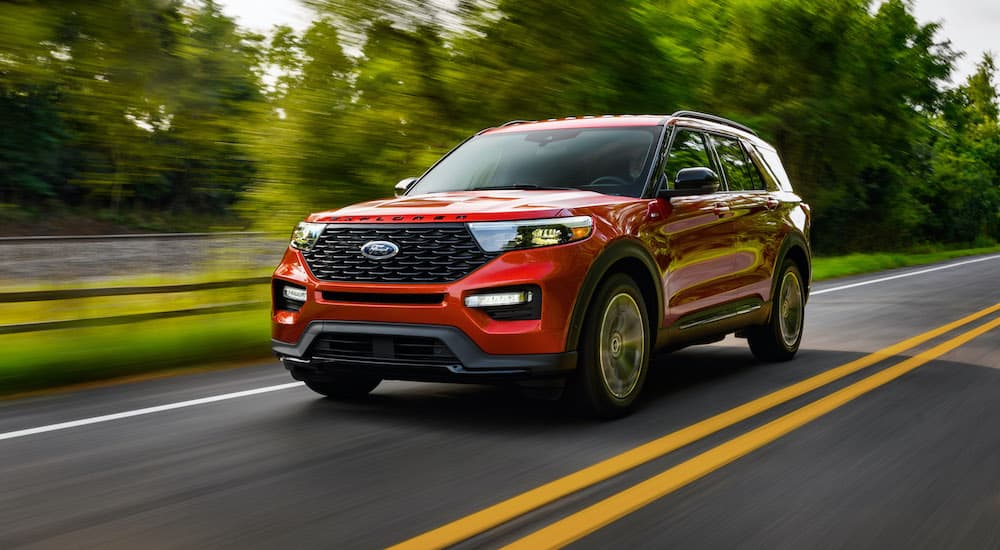 The Ford Explorer is a chameleon of a three-row SUV. While it’s nothing new for a manufacturer to offer a wide variety of trims for a model, the sheer versatility of the Explorer lineup opens the door to near-endless customization at your North Highlands Ford dealer. Looking for some mud-slinging off-road capability? The new Timberline is up for the challenge. Meanwhile, those seeking a more refined ride will appreciate the King Ranch’s focus on luxury, and if high-performance power is the name of the game, the tried-and-true ST will have you glued to the back of your headrest.

These distinct models have proved popular, with a mass appeal that vaulted the Explorer to the top of the sales charts in the three-row category. Now Ford is introducing a new trim option that expands the SUVs allure even further, fusing the sporty styling of the popular ST with a pared-down engine to deliver an affordable – but still flashy – alternative. Starting in the mid-$40,000 range, the 2022 Ford Explorer ST-Line slots in nicely in the lower half of the year’s trim options, an almost $7,000 discount over the full ST model. Let’s take a closer look at this intriguing new option from Ford, and discover what exactly sets the ST-Line apart from its sporty forerunner.

First, let’s clear up a little confusion. The ST designation, short for Sport Technologies in Ford speak, is reserved for those vaunted models that the Blue Oval deems worthy of a high-performance upgrade. This overhaul typically includes a beefed-up engine, the requisite technology to maximize all that power, and the sort of aggressive styling that distinguishes an ST from its stablemates. The Explorer ST-Line, on the other hand, is a trim inspired by the Explorer ST model. While it doesn’t come with ST’s 400 horsepower twin-turbo V6, it embraces all the model’s styling cues, offering drivers with less demanding needs the best of both worlds while cutting an impressive figure.

When trying to figure out what the ST-Line is all about, it’s helpful to look at the brand’s track record for producing high-performance versions of some of its most popular models. Ford’s first experiment in the world of Sport Technologies came in 1997 with the introduction of the Ford Mondeo ST24. Capitalizing on the late-90s demand for “hot hatches” or souped-up hatchbacks, the Mondeo showcased the manufacturer’s ability to reimagine a popular model for an entirely new sector of the market. In 2002, Ford expanded on the concept, giving the popular Focus compact its own ST treatment. Designed by the brand’s European performance car and motorsport division, Ford TeamRS, the compact was able to leverage Ford’s reputation in the rally scene into instant success. The Focus would go on to become a perennial odds-on favorite for receiving the ST treatment, with the compact and subcompact Fiesta offering an ST version from 2004 to 2017.

In 2019, the Ford Edge was the first SUV to get an ST overhaul, with a pared-down ST-Line option following in 2020. This represents Ford’s first foray into the ST-Line concept, essentially envisioned as a less-powerful, more appearance-focused take on a high-performance vehicle. Ringing in at almost $5,000 less than the Edge ST, it’s not hard to understand the ST-Line’s appeal for those who are rarely testing the limits of their SUV’s performance. In exchange, drivers got the ever-popular blacked-out design features, including a honeycomb grill, lower cladding, body-colored bumpers, 20-inch wheels, and LED lighting. These looks extend to the SUV’s interior, where innovative tech features like Ford’s SYNC 3 infotainment system, wireless charging pad, and bold styling continue the trend of prioritizing both appearance and convenience. 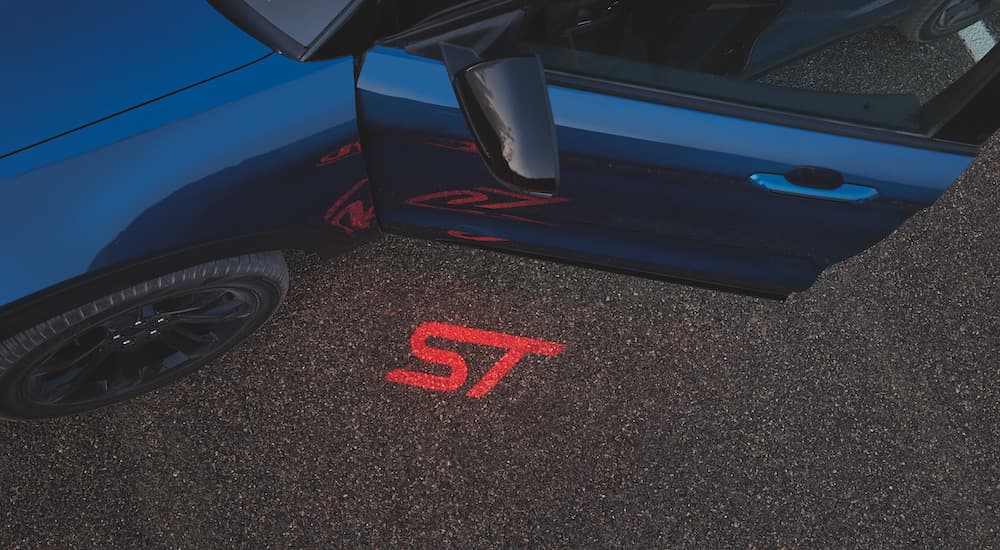 Best of Both Worlds

Debuting in 2022, The Ford Explorer ST-Line follows a very similar playbook. The SUV trades in the Explorer ST’s 3.0-liter EcoBoost engine for a 2.3-liter four-cylinder version while keeping all the design flourishes that give the ST its distinctive, aggressive appearance. The ST-Line version has the same 10-speed transmission as the ST itself, with a slightly more demure 300 horsepower and 310-pound-feet of torque that should be more than enough power unless you plan on taking the off-road route back from the grocery store. In exchange, drivers get the opportunity to turn heads with the sort of styling one usually finds on vehicles pulled up to the higher-octane pumps, such as dual exhaust tips, 20-inch machined aluminum wheels, and of course, all-black everything, from grills and hood badging to front and rear lighting. The blacked-out “Explorer” branding on the grill is particularly alluring, encompassing the sort of melodramatic styling that makes high-performance vehicles so fun to roll around in.

The Explorer ST-Line’s interior offers an appealing synthesis of comfort and convenience while still maintaining some of the bold design cues of the original ST. Sure, it has a heated steering wheel and premium floor mats, but the red accent stitching lends some race day attitude throughout the interior. The Ebony Black ActiveX seats with Ford’s Miko perforated suede inserts lend a sporty look one wouldn’t typically find in the class, while generous available tech features like a 12-speaker Bang & Olufsen sound system, 360-degree camera, and auto-dimming rearview mirror up the SUV’s luxury credentials.

“These changes to the Explorer lineup were guided by what our customers told us they wanted,” says Lee Newcombe, Ford Explorer marketing manager. “With the addition of Explorer ST-Line, Explorer will offer the broadest performance-inspired lineup in the segment.” As Ford continues to expand its lineup of specialized models, it is the consumer that continues to benefit.

The introduction of the ST-Line doesn’t mean the end for the ST itself. The original Explorer ST is back as well and sees a few key changes for the 2022 model year. Most notably, the SUV now comes standard with rear-wheel drive, with an all-wheel drive option available. Between the original all-wheel drive ST, the new rear-wheel drive ST, and the ST-Line, there’s a performance-inspired Explorer out there for every driver and budget, and that’s not even mentioning all the other models being offered this year. 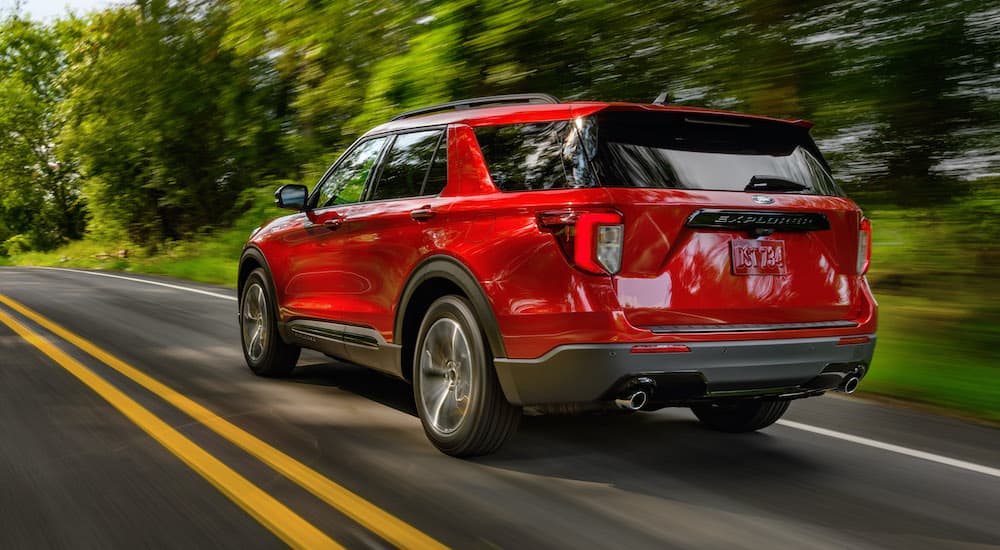 Future Ford of Sacramento is your home for all things Ford. From exciting new offerings like the Explorer ST-Line and recently-revived Ford Bronco to crowd favorites like the Ford Escape, our selection of new and used cars, trucks and SUVs simply can’t be beat. We’re particularly excited about the new generation of sustainably-minded takes on some of our favorite Ford models, with vehicles such as the F-150 Lightning and Mustang Mach-E representing the future of vehicle design and proving you don’t need to sacrifice power or excitement to go green.

Stop by today and let our friendly sales staff fill you in on some of the intriguing new models from America’s most storied auto manufacturer. A proud recipient of Ford’s President’s Award for customer satisfaction and sales volume, we offer a high-caliber car buying experience that our competitors simply can’t match. With an in-house finance center as well as a service and parts department, we’ve got everything you need to both find that new vehicle and keep it on the road. When you’re in the market for a new vehicle, make Future Ford of Sacramento your first stop.