Have You Heard? A New Mustang Is Coming! 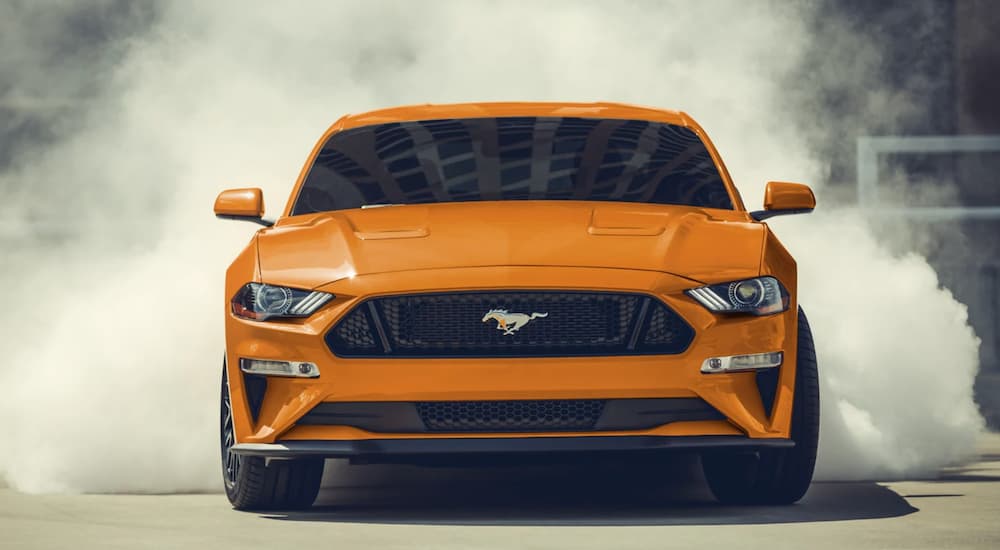 Can you name the most iconic sports car in America? We’ll give you a hint – it’s sitting on our lot and is one of the many reasons why we love being your Woodland Ford dealer. It’s none other than the Ford Mustang.

Despite being developed on a shoestring budget and in record time, the Mustang was a massive success following its official debut at the 1964 World’s Fair. Ford didn’t expect the car, which was designed in an attempt to attract a younger demographic of customers, to make such an impression and planned to sell around 150,000 units in the Mustang’s first year. Much to Ford’s surprise, dealers sold over 22,000 Mustangs on the first day and over 418,000 in the first year.

The Mustang launched the pony car segment and has proudly led the genre ever since. So, what does the future hold for the iconic Mustang? The rumor mill is abuzz with news of a redesigned 2023 Mustang that will launch the pony car’s seventh generation and set a new standard of performance. While details from Ford are scarce, it’s fun to speculate on what the 2023 Mustang will offer and how it will perform.

As with rumors, nothing is ever set in stone, and that’s apparent when you look at other sources who suggest that the new Mustang has been delayed and won’t debut until 2028. For many industry reporters, this doesn’t seem likely. Spy photos of the new Mustang show its progress and prove that scrapping the project would cause Ford to take a huge financial hit – hundreds of millions of dollars of work lost and reinvested to start over. This isn’t likely even from one of the biggest automakers in the world. 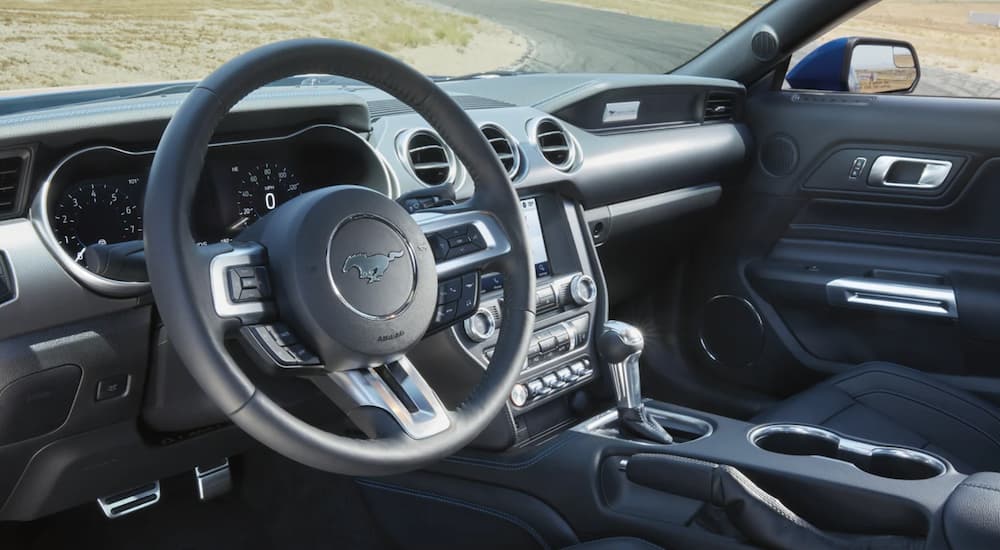 Ford introduced the new CD6 platform on the 2020 Ford Explorer and 2020 Lincoln Aviator. This rear-wheel-drive architecture, or at least an updated version, is rumored to make its way to the Mustang S650. This means that the Mustang would share a platform with a crossover, which is hard to imagine for many Mustang fans. However, the platform is versatile and can support both rear-wheel drive and all-wheel drive models; it’s also capable of supporting the massive power that’s found in the Lincoln Aviator hybrid, which delivers 494 horsepower and 634 lb-ft of torque – more than the current Mustang GT.

Experts anticipate the 2023 Mustang will continue to offer a MagneRide suspension, which was first introduced on the 2002 Cadillac Seville. Suspensions typically fall into two categories: they’re either comfortable or they’re responsive. Comfortable suspensions deliver the smooth ride you’ll find in sedans or crossovers, while responsive suspensions make sports cars like the Mustang easy to handle around curves and corners. What does this mean for the 2023 Mustang?

The MagneRide suspension is designed to give you the best of both worlds – comfort and responsiveness. Using magnets, the suspension actively monitors the road and responds 1,000 times per second for each damper to deliver a balanced and smooth ride. This makes sports cars like the Mustang incredibly fun and enjoyable to drive as you push them to their limits.

As we mentioned, Ford hasn’t released any details about the new Mustang or its powertrains, but that hasn’t stopped speculation. Motor1 reported that Ford plans to eliminate every internal combustion engine from the Mustang lineup by 2028, which is a drastic turn of events. The elimination of internal combustion engines (i.e. gas-powered engines like the Mustang’s powerful V8s) is an end-goal for the American automotive industry, as we see with the debut of each new EV. However, eliminating gas powertrains by 2028 or by 2030 isn’t a practical timeline. Instead, it’s likely that the 2023 Mustang will offer several new powertrains and position itself for a new hybrid or EV model in the future.

The team over at CJPonyParts supports this rumor and published a list of potential powertrains that could make their way under the hood of the 2023 Mustang. At the top of that list is the 3.5-liter EcoBoost twin-turbo V6 that powers the Ford F-150 and the Lincoln Aviator. Looking at models like the Ford Ranger and the Ford Edge ST suggests that the new Mustang might also see the smaller 2.7-liter EcoBoost Turbo V6 added to its lineup. Other options include the existing 5.0-liter Coyote V8 and 2.3-liter EcoBoost Turbo, as well as the new 3.5-liter EcoBoost Twin-Turbo V6 Hybrid, which could deliver up to 500 horsepower and 600 lb-ft of torque. 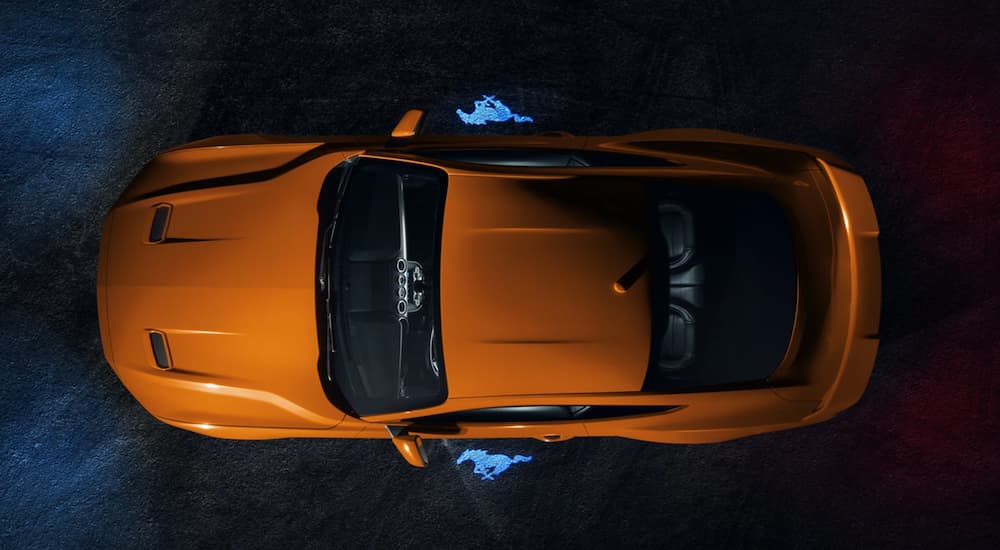 Automotive News has sources close to Ford and reports that the automaker expects to sell around 97,000 Mustangs per year following the sports car’s 2023 debut. Of these 97,000 models, the automaker anticipates 20,000 of those to be convertibles. What does this tell us about the 2023 Mustang?

Mustang sales have been falling consistently over the last few years, but Ford projects a 25 percent increase in sales by 2023. This means that Ford likely has something big up its sleeve that will send sales soaring once again. It also leads us back to the first rumor regarding the Mustang’s timeline. With sales falling, it doesn’t make sense for Ford to scrap the work already done on the S650 and extend its debut until later. The loss would be far too immense.

The debut of the Mustang Mach-E has left many die-hard Mustang fans in a frenzy that a crossover would sport the pony car’s iconic nameplate. However, the Mach-E is a sign of what’s to come as experts around the country agree that a true Mustang EV will arrive sooner rather than later. Rumors suggest that the Mustang will see an all-wheel drive hybrid option at some point in its seventh generation, which means planning is already underway for a greener future for the Mustang. For now, Ford is likely watching Mach-E sales and customer feedback to deliver an even better Mustang EV when the time is right.

The Mustang’s debut in 1965 ignited a fiery passion among drivers who clamored to get behind the wheel of America’s new pony car. That passion continues today, as we see in the excitement circulating around mere rumors of the seventh-generation Mustang. Will it offer a hybrid powertrain? Will it be lighter or heavier than its predecessor? Will it debut in 2023, or is it delayed? How will it handle?

It’s hard to separate fact from fiction when Ford remains noticeably absent from the discussion. Their strategy is ingenious, fueling the passion of Mustang fans and dealers around the nation. We share that excitement and that passion for the future of the Mustang and the experience it delivers to those lucky enough to get behind its wheel.