Cruisin’ in the Ford Mustang Mach-E 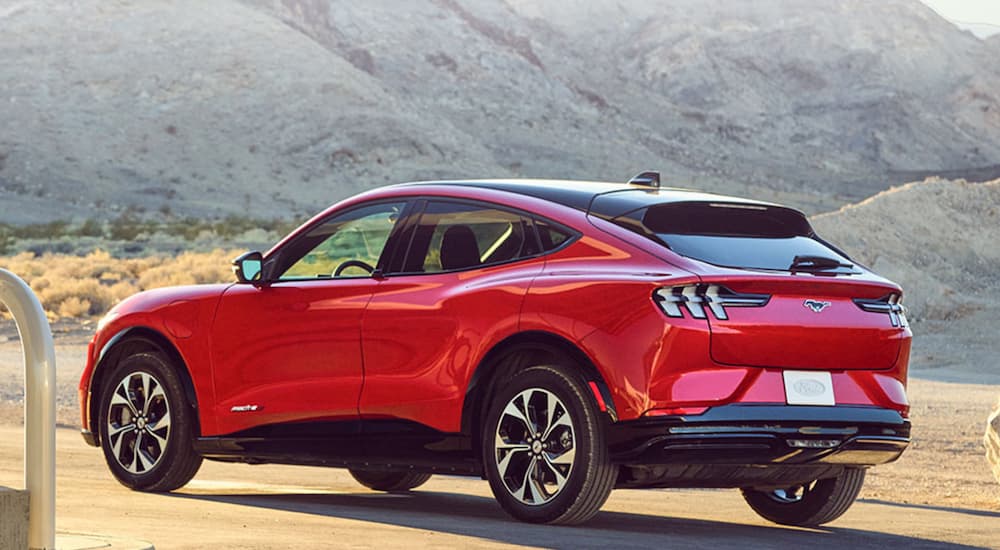 It seems fair to say that right now, most of the coolest cars are electric. Electric vehicles are growing in popularity, in part due to their environmental friendliness and in part due to their style. Now imagine taking what has always been one of the coolest cars in the automotive world and turning it into an electric vehicle. That sounds like a cool car, right? Well, imagine no longer, for we introduce you to the Ford Mustang Mach-E. This model premiered in the 2021 model year, and while little is known about the 2022 Mach-E, we want you to become more familiar with the Mach-E itself. By the end of this article, you may just want to search “Ford dealer near me” and go buy a Mach-E. Maybe some of you are not in the market for a new vehicle, but we encourage you to keep reading because this car is fascinating just to learn about. It goes without saying that the Mustang is a legendary car. So legendary, in fact, that it has been a mainstay of the Ford lineup for 56 years. Over the years, the Mustang has been relatively unchanged, sticking to the tried and true formula of a big V8 engine in a small two-door car. That is, until the introduction of the Mach-E. You know you’ve got something special when it breaks 56 years of tradition.

Before we get into all of the exciting ins and outs of the Mach-E, let’s just take a moment to acknowledge the fact that the Mach-E is not only a Mustang EV, but also a Mustang SUV. You may have mixed reactions to this, unsure how to feel. Well, this development does relate to Ford’s EV underbody battery placement, but it actually turns out to be quite an exciting development in that it maximizes interior space. Long story short: Don’t let this concern you; the Mach-E still looks like a Mustang and maintains its signature classiness and sportiness; it just looks like a bigger Mustang with a little more girth to its body. But crossovers are in right now! If you still need some convincing on the SUV look, know that it provides 59.6 cubic feet of cargo space with the rear seats folded. With the SUV build comes an increase in capabilities, and seeing as the Mach-E was has been designed for and tested in extreme weather conditions, you may just want to take it up to the mountains and do some snowy driving. If that’s not enough, an appealing element of the extra space is that it provides a drainable front trunk, which will provide a non-problematic space to store wet items. Ford HQ has even suggested taking advantage of this drainable trunk space by packing it with ice and using it as a cooler. Just another advantage of driving an EV. 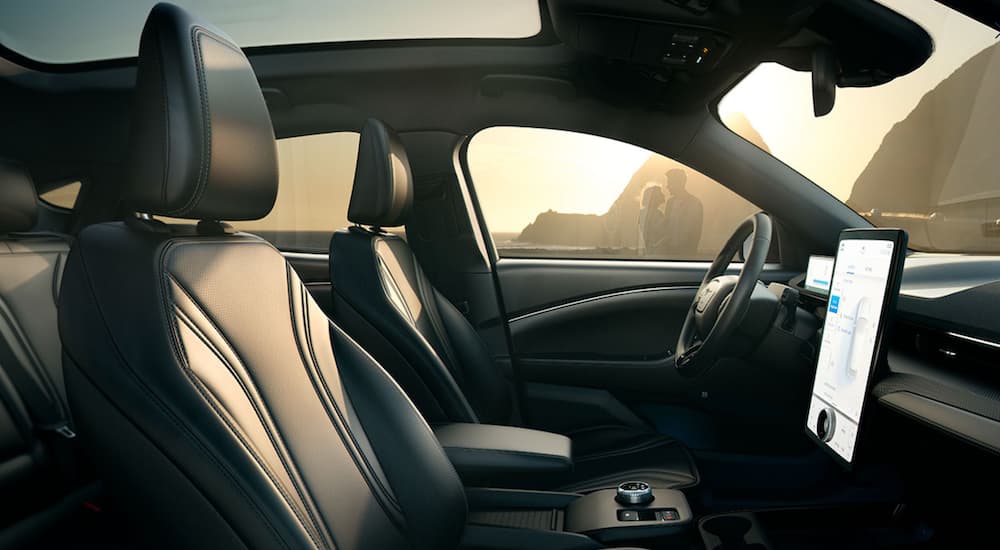 The Mach-E comes in four different trims: Select, California Route 1, Premium, and GT. Over these four trims, the vehicle offers both standard and extended-range battery with either rear-wheel drive or all-wheel drive. The Mach-E has a range of up to 305 miles with the extended-range battery and RWD. If you are more interested in powering through all obstacles, you can enjoy up to 346 horsepower and 428 lb-ft of torque (this is a small, crossover EV, mind you) when the vehicle is configured with AWD. Now imagine all of that, but with the silence of an electric vehicle. An additional trim is the Mach-E GT Performance Edition, which is designed for thrills, being able to accelerate from 0-60 in 3.5 seconds and equipped with the AWD system that independently applies torque to the front and rear axles. This trim has 480 horsepower (think about that number, consider the size of this car, and then sit with that) and 634 lb-ft of torque. For those keeping track, that is the same amount of horsepower and over 200 more lb-ft of torque than you will get from the traditional Mustang’s 5.0L V8 engine.

An Experience for Everyone

The Mach-E offers three different and innovative driving experiences with Whisper, Engage, and Unbridled. While these driving modes come with differences in driving dynamics, the really cool part about these different experiences is that it adjusts the sound and lighting to give you a unique, exciting, and sensory driving experience. The cluster animations will also make this a visually stimulating experience. Regardless of which experience you choose, it can be made into an exhilarating auditory experience with available Bang & Olufsen speakers. You may find this whole experience especially cool (literally) at night with an available panoramic fixed-glass roof, which has a secret layer of glass designed to keep the interior cool in the summer and warm in the winter.

Hands-down, the most advanced technology feature of the Mach-E is its next-generation SYNC 4A infotainment system. Part of this system includes a standard 15.5-inch screen (in case it wasn’t obvious, that’s a huge screen for any car, but especially one of this size) which has the AI capability to identify your preferences and adjust to your habits. According to Darren Palmer, Ford global director for battery electric vehicles: “It can suggest going to the gym if it learns Mondays are workout days or calling home if you do that every day after work. The result is a cloud-connected assistant and interface that’s intuitive, beautiful, and ready for the future thanks to fast over-the-air updates.” You can also expect your Mach-E to only get better over time, as these over-the-air updates include maintenance updates and adding entirely new features. The Mach-E is essentially a robot. 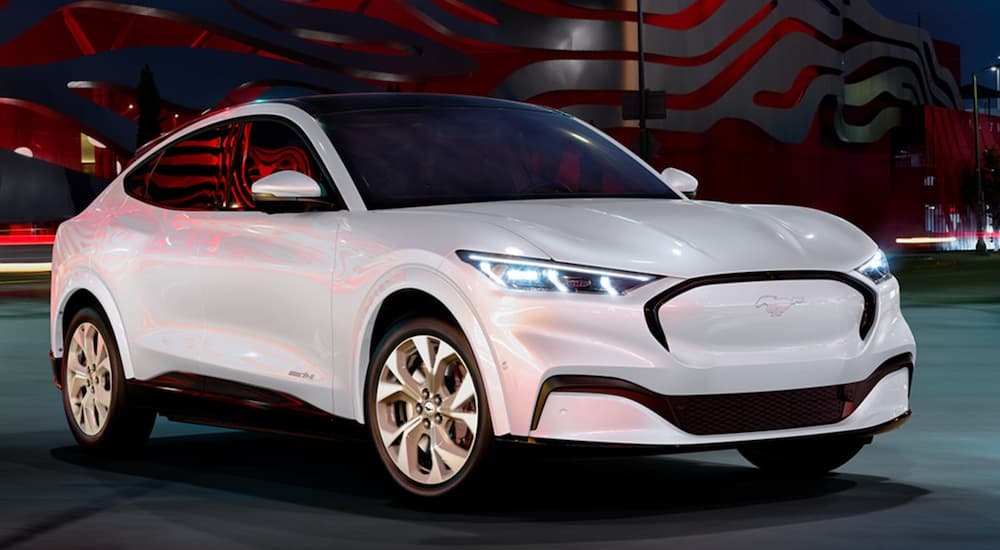 And now, the moment you’ve all been waiting for… the battery. As stated above, the Mach-E offers standard range (66 kWh usable lithium-ion capacity; 288 lithium-ion cells) and extended range (88 kWh usable capacity; 376 lithium-ion cells). Both are liquid-cooled, making for high-performance in extreme weather. The battery is encased in a waterproof material and surrounded by crash-absorption protection to make sure that nothing happens to the heart of the vehicle. With a ride this nice, you’ll probably end up doing a lot of driving, but the Mach-E has that taken care of. Included with the vehicle is a mobile charger, which adds 20 miles per charging hour on a 240V outlet. The navigation system will use its AI features to identify public charging locations on the road and alert drivers of these locations along the route. Owners will also have access to FordPass Charging Network, which is the largest public charging network in the country, with 13,500 charging stations. These stations include DC fast chargers, which are able to add up to 61 miles of range in 10 minutes and charge from 10 percent to 80 percent in about 45 minutes.

Is This as Good as It Sounds?

We’ll let the accolades speak for themselves. The Mach-E has been named North American Utility Vehicle of the Year and an IIHS Top Safety Pick, as well as being Car and Driver Magazine’s 2021 EV of the Year. So we’re not the only ones to think highly of the Mach-E. Now, here’s a question that has probably been percolating in your head: how much does it cost? The Mach-E has an MSRP starting at $42,895. Is this a pricey car? Yes, no doubt. But, it is actually significantly cheaper than a good number of its EV counterparts under other brands while offering leading features under one of the most notable names in the automotive world. The Mach-E is also still eligible for the $7,500 federal tax credit, reducing its effective price to just over $35,000. Electric vehicles are not quite as obscure as they used to be. For a while, an electric vehicle was a novelty that seemed like it was probably going to be nothing more than a fad. But, as time goes on, we are seeing that electric vehicles are not only growing in popularity but are beginning to dominate the market and the court of public opinion. So, even if you’re not in the market for a Ford Mach-E right now, chances are you’ll be behind the wheel of an electric vehicle sometime in the not-too-distant future as these cars continue to be refined and made more accessible.