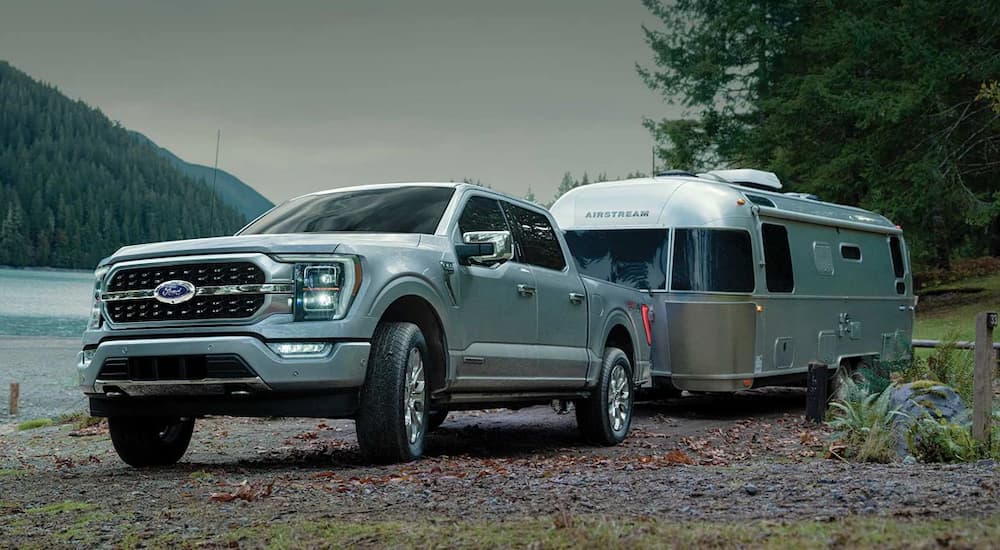 As your Sacramento Ford F-150 dealership, we know our Ford history, and we keep up to date on the plans the company is making for the future. Ford has been producing the F Series of trucks since 1948 when the motor company officially renamed its former truck line introduced in 1942. For decades, the F-100 Series was produced as the signature lineup of pickups until Ford chose to reconfigure the lineup with the F-150. Over the years of its truck manufacturing, Ford has won the hearts of American truck drivers as the best-selling truck since 1977, and then in 1981, that number was overtaken to become the best-selling overall vehicle, beating out the former claim to fame of the VW Beetle. Now in its 14th generation, the Ford F-150 has a long history of inventive features and designs that shape America’s love of the pickup.

Immediately practical, the pickup truck in America became a vehicle perfectly suited to both merchants and farmers for its capability in transporting goods in the sturdy bed. Ford intelligently chose to offer its first generation of the F series pickups in several forms to cater to the masses of working folks. Whether you chose the traditional pickup body, a school bus, or a panel truck with a covered bed, the first F-Series trucks opened the floodgates for flexible body styles. The F-100 Series began in the second generation, switched from the F-1 half-ton pickup truck of the first generation, with later years sporting the wraparound windshield and the first seat belts for the series.

Third generation F-Series trucks saw the addition of four-wheel drive in 1959, then in the fourth generation, Ford began using its signature twin I-beam suspension, which was the standard from 1965 to 1996. Also, during the third generation, the F-Series trucks were redesigned with a boxier shape that became the styling for many years to come. In 1966, fourth-generation trucks were donned with a new trim line called the Ranger, which was the top tier of the lineup at the time and featured comforts like carpet and air conditioning. Once the F-Series hit its fifth generation in 1967, an enlarged body and cab with the broad grille face showcasing the Ford name in uppercase lettering vaulted the styling into the appearance that would remain until close to the turn of the century. 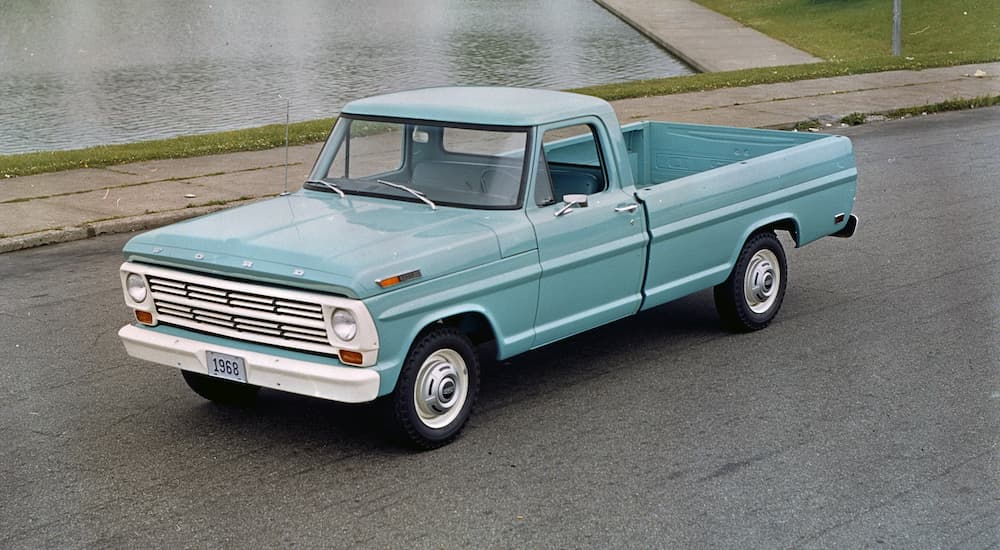 Middle Ages for a Storied Truck

Once the F-Series hit its sixth generation, Ford began adding more practicality to its build with features like enlarged cabs with rear jump seats or a folding rear seat starting in 1974. It was in 1975 that Ford began its first F-150 Series of trucks sold alongside the F-100 Series, with the F-150 having begun production to adhere to new emission restrictions for vehicles in the US. The following year saw a new engine line that retired the FE Ford had been using for 20 years, changing it over to the 335 and 385 engines.

When the F-Series trucks continued into the 1980s with their seventh generation, Ford began offering more creature comforts for the interior, and the exterior redesign paid closer attention to aerodynamics to save on fuel. By 1983, Ford chose to end the F-100 Series trucks as the base level trim, replacing it with the F-150 only a year after the new blue oval badge became the Ford insignia we all still recognize today.

Another big change during the 1980s was the shift of the Ranger as a trim level of the F-Series to its own line of what was then called compact trucks. Near the end of the ’80s, Ford did away with carburetors completely during the eighth generation and became the first brand to sell pickups that would be friendlier to the environment. By the time the ninth generation was introduced in 1992, Ford had rolled out trucks that saw their second major redesign since the inception of the F-Series. This generation took on rounder edges in the hood and roof lines as well as lowering the cowl and offering the first airbags in the driver’s side of the vehicle. 1993 was the first year of the sport truck called the SVT Lightning, a truck that was tidy in size but big on power with its V8 engine that later became one of the fastest trucks on the market.

For the tenth generation, Ford leaned into the trend of buyers who wanted their trucks to serve as both work and personal vehicles. Seeing an opportunity to further growth of the company, Ford seized its chance to provide people with a new series of trucks that would be dedicated to the commercial side of the business in the Super Duty line. This reserved the F-150 Series for combined work and personal use, and such features as the Extended Cab continued to be offered but with the new rear third door to make entry to the back seat easier. By 1999, Ford added a fourth door due to the popularity of the rear entry option.

Turn of the Millennium

By 2004, the F-150 changed over to a fully boxed frame, and ride quality improved with a new system of shocks combined with the new independent front suspension introduced with the tenth generation. During this period, Ford had introduced its new FX4 off-road variant, which became its own trim in the redesign. Noticing the increased popularity of the Super Duty truck design, Ford chose to update the F-150 to bear a resemblance to its bigger sibling with a new grille and a restoration of the former boxy shape in a more modern style. In the twelfth generation introduced for 2009, the F-Series gained a new trim called the Raptor, another off-road option for enthusiasts. The EcoBoost engine made its debut as a twin-turbocharged V6 that focused on saving fuel in 2011.

During the last year of the 13th generation, the F-150 had cemented its place as one of the longest-lasting vehicles on the market, and then a major new development for the 14th generation shifted the entire truck industry. Ford began producing the F-150 Series with an aluminum body, reducing its body weight by a whopping 750 pounds. In the same year, 2015 models were the first trucks to offer adaptive cruise control. For a mid-cycle refresh, Ford decided to offer its PowerStroke diesel engine as an option for the F-150 for the first time in 2018. Finally, for its most recent generation in 2021, Ford redesigned over 90 percent of the body of the F-150 in a game-changing debut of its newest half-ton models. Within this lineup, Ford made available its first hybrid truck, which featured the capability to serve as a high-powered generator for work sites.

In May of 2021, Ford unveiled the most recent F-150 variant in its fully electric glory: the Lightning. This brand new EV model is reviving the old nameplate. Perhaps to stave off concerns about switching from the familiar gas-powered trucks to a fully electric powertrain, Ford chose to produce the new Lightning in the same body style as the rest of the F-150 lineup, making it possible for buyers of the gas-powered trucks to be able to use their accessories in the new electric version. The familiar look of the design would mean an easy transition from one type of powertrain to another, though certain benefits of the electric truck could prove to be alluring. Without the need for the mechanical parts of a gas engine, the Lightning offers the first front trunk of the F-150 Series, and the onboard generator of the hybrid variant introduced for the previous generation is marketed as being able to power a whole household for three days.

Powerful engine capability is a hallmark of electric engines, and the Lightning will feature a towing capability of up to 10,000 pounds with its extended range batteries. When fully charged, the F-150 Lightning should be able to travel up to 300 miles on a single charge with that battery. Other significant features of the fully electric truck include a faster zero to 60 time just below 4.5 seconds, an LED light strip across the top of the grille as a stand-out styling of its powertrain, and dual motors dedicated to both axles that power the all-wheel drive. 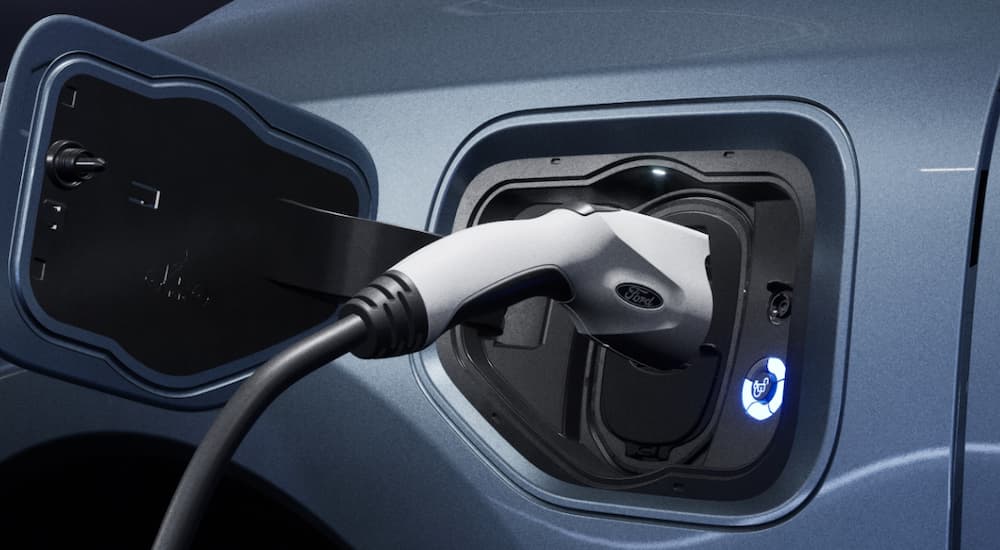 A Strong Past and a Bright Future

As the new fully electric models begin to be produced for the spring of 2022, Ford continues to offer other new variants within the F-150 lineup. The Tremor is here with its enthusiast-oriented off-road capability, and the upcoming Raptor R promises to feature a high-powered engine like that of a Mustang. Over its decades of pickup truck production, Ford has remained an icon of manufacturing for the masses and continues to use the data of its buyers to guide its future trends. We simply can’t wait to see what Ford is going to do next.